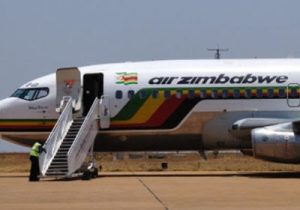 The situation at the airline, especially the debilitating shortage of aircraft in the past few months, has triggered fears of further job losses.

In June 2011, AirZim shut down under similar circumstances. It remained grounded until November 2012 when it kicked off flights on domestic routes, before expanding into South Africa, Zambia and Tanzania.

Reports say aircraft shortages have forced the airline to quietly pull out of the Harare-Lusaka route.This was one of the routes that AirZim had projected to push passenger numbers and revenue, until the Chinese assembled MA60 plane that it was operating on the route developed technical faults and was grounded in January last year.

There have been low tourist arrivals in the resort town, which usually drive passengers.
In June 2015, the airline took the bold move to reopen the Harare-Lusaka route to compete with global airlines that have dominated African skies, four years after discontinuing service.

With colossal debts estimated at well over US$300 million, and with new management battling to fulfil the airline’s role as a catalyst for recovery, AirZim has been staggering on since re-launching operations in November 2012.

AirZim chairperson, Chipo Dyanda, declined to comment on operational matters, referring questions to Muzenda, who is said to be battling to prevail over an intense power struggle that has engulfed the airline and disrupted operations.

Both board and management are clear on their mandate, and that is to revive Air Zimbabwe. Generating bad blood is not one of the mandates; therefore, we would never give it space at AirZim. We are fully occupied and have no time for distractions and detractors,” she said.

There has been a worrying decline in passenger numbers in the past few months, according to sources. AirZim’s aged fleet comprises of two Boeing 767s, three B737s, three MA60s and two Airbus A320s.

Out of these planes, only two have been flying in the past few weeks, forcing management to hire a B737 aircraft from South Africa’s Star Air as a stop gap measure.

AirZim suspended Zambia operations and we have closed the offices,” a source said.
Aviation industry experts said many of the routes that AirZim had opened since 2015 require some form of government subsidies before they become self sufficient.
But because government, which controls 100 percent shareholding in the airline, has been struggling to balance its books, there has not been such support.