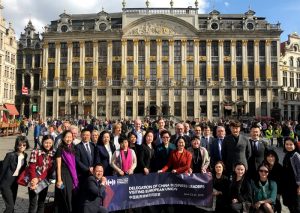 Macao (Macao SAR) – May 17, 2018 (travelindex.com) – Led by Ms. Pansy Ho, Secretary-General and Vice Chairman of the Global Tourism Economy Forum (“GTEF” or “the Forum”), the Delegation of China Business Leaders Visiting European Union (“Delegation”) recently completed an important mission in the EU. The objective of the mission was three-fold: to introduce GTEF to tourism stakeholders in the public and private sectors in the EU; to engage them in exchanges on tourism policy, business environment and investment opportunities; and to invite them to GTEF 2018, an official partner of the 2018 EU-China Tourism Year (“ECTY2018”), where the EU will be presented as the Partner Region and Guangdong Province as the Featured Chinese Province with a special focus on the Greater Bay Area.

In The Hague, The Netherlands, the Delegation attended a lunch meeting with Mr. Frank Oostdam, President and Director of Dutch Association of Travel Agents and Tour Operators (ANVR); Mr. Jochum Haakma, Chairman of the EU China Business Council and former Dutch Consul General in Hong Kong and Shanghai; and Mr. Henri Remmers, Founder and Director of Corpus Museum in Leiden. The Delegation later visited the world-renowned Hotelschool The Hague where Ms. Regine von Stieglitz, President of Board of Directors, gave a brief introduction of the school’s curriculum, followed by group discussion of topics like hospitality training and education, as well as facilitation of EU-China tourism cooperation through educational means. The visit in The Hague concluded with a tour of the headquarters of citizenM, a pioneer of innovative hospitality experience for millennial travelers, where the Delegation learned about the hotel’s project development and operation. The Delegation then travelled to Amsterdam and joined a guided tour at Rijksmuseum conducted by Mr. Taco Dibbits, General Director of Collections, on the museum’s history, development and collections.

In addition, the Delegation paid courtesy calls on Chinese ambassadors in the EU countries visited. Mr. Zhang Ming, Ambassador, Head of the China Mission to the EU; Mr. Wang Hongjian, Minister of the Chinese Mission to EU; Mr. Wu Ken, Ambassador of China to the Netherlands; and Mr. Li Xiaosi, Ambassador of China to Austria, received the Delegation and generously shared the latest news and updates on tourism, cultural and economic relations between China and the respective EU member states.

As a partner event of ECTY 2018, GTEF is a perfect platform to bring two of the world’s most vibrant economies, EU and Guangdong Province, together to advance economic, cultural and people-to-people exchanges through tourism. Set to be held at MGM COTAI on October 23 and 24 under the theme “Strategic Partnership in a New Era, Rising Momentum for a Shared Future”, GTEF 2018 will explore how the EU, the second-most popular destination for outbound Chinese tourists outside Asia in 2017, and the GBA, which will be the seventh largest economic bloc in the world, can combine their collective effort to create a new catalyst for global economy. GTEF will also offer tourism promotion, investment and cooperation opportunities through bilateral trade meetings, business matching, networking, workshops, exhibitions, etc.

About Global Tourism Economy Forum
The Global Tourism Economy Forum (GTEF) is hosted by the Secretariat for Social Affairs and Culture of the Macao SAR Government, co-organized by the China Chamber of Tourism under the authorization of All-China Federation of Industry and Commerce (ACFIC), and coordinated by GTERC in collaboration with UNWTO. GTEF’s supporting units include the Former China National Tourism Administration, the Liaison Office of the Central People’s Government in the Macao SAR, Office of the Commissioner of the Ministry of Foreign Affairs of the People’s Republic of China in the Macao SAR, World Travel and Tourism Council (WTTC), Pacific Asia Travel Association (PATA), World Tourism Cities Federation (WTCF), European Travel Commission (ETC) and Macao Government Tourism Office (MGTO).

Since its inception in 2012, GTEF has successfully established itself as an influential high-level cooperation platform to promote sustainable development in the global tourism industry with a focus on China. To date, GTEF had received more than 8,000 participants from 83 countries and regions, including delegations from 106 provinces and cities of Mainland China; and 437 internationally
renowned speakers.