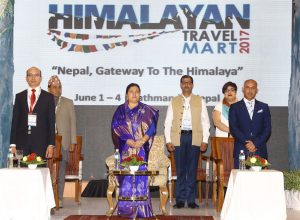 Kathmandu (Nepal) – June 8, 2017 (travelindex.com) – Himalayan Travel Mart, which was held from the 1st of June to the 4th concluded on a very high note. The main objective of the Travel Mart was to establish Nepal, as a Gateway to the Himalaya. The outcome places, the nation in a positive light, in the international arena, as a destination capable of hosting events of such international level. The event saw a participation of around 74 Buyers from 36 Countries, and 50 plus Sellers, representing the Himalayan Region, like Bhutan, India, Tibet, Indonesia and Nepal.

The Himalayan Travel Mart Conference was held on the 2nd of June, at the Soaltee Crowne Plaza, where travel industries dignitaries and experts, shared their knowledge and experiences on the topic “Himalayan Tourism and Innovation & Marketing”, which was of international standard, and would definitely benefit industry professionals here in Nepal. The Inauguration ceremony was done by Nepal’s Right Hon. President Mrs. Bidya Devi Bhandari, amidst a gala event, where the CEO of Nepal Tourism Board, Mr. Deepak Raj Joshi, welcomed the crowd and stated that this sort of event will re define the entire tourism Industry. While, the Chairman of PATA Nepal Chapter, Mr. Suman Pandey, talked about the main objective of organizing this travel mart. The Chairman and Managing Director of Air India, Mr. Aswini Lohani, was the key note speaker of the event, where he declared the ‘1 +1’ Business class scheme .So, Air India will be running this promotional scheme, Buy One get one free . While the President, praised Nepal as a top tourist destination, and stressed the importance of promoting Nepal to the whole world.

The President honored, PATA’s immediate past Chairman, Mr. Andrew Jones, CEO of PATA Dr. Mario Hardy, and ‘Crisis Management and Tourism recovery Management’ expert Dr. Bert Van Walbeek at the event. Ms. Sarah Mathews, the Current Chairman of PATA, also congratulated everyone for organizing a first ever mega international mart as such. “With the participation of around 225 International delegates from over 53 nations making it an event attended by 500 plus delegates, the event can be compared to the likes of major international travel marts around the world” stated Sarah Mathews.

Mr. Shankar Prasad Adhikary, Secretary of the Ministry of Culture, Tourism and Civil Aviation in his vote of thanks commended PATA Nepal Chapter for organizing such a historic event. In the light of the success of the Himalayan Travel Mart 2017, the CEO of Nepal Tourism Board Mr. Deepak Raj concluded saying, “Since the Himalayan Travel Mart has become a flagship for tourism promotion, the promotion and continuation of the Mart is necessary in the future. On this note, the next Himalayan Travel Mart 2018, was announced which is scheduled to take place from the 1st of June to the 3rd of June next year.

The Official Airline Partner of the Himalayan Travel Mart was Air India and the Official Hotel Partner was Soaltee Crowne Plaza.

With the successful conclusion of the Himalayan Travel Mart 2017, we would like to end on a special note of thanks and appreciation to all our supporting organizers, various travel and tourism associations, hotels, airline companies, travel and tour operators, PATA Nepal Chapter’s Executive team and the PATA Nepal Student Chapter volunteers and we look forward to their future support and encouragement for the next Himalayan Travel Mart.