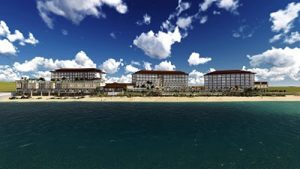 Cebu (Philippines) – July 21, 2017 (travelindex.com) – Thailand-based, global hospitality company Dusit International has signed a hotel management agreement with Robinsons Land Corporation (RLC), one of the Philippines’ leading real estate companies, to operate the Dusit Thani Mactan Cebu, a five-star resort situated on the northern peninsula of Mactan island. This resort is slated to open in the fourth quarter of 2018.

Mactan island is located a few kilometers from Cebu in the Central Visayas region and is known for its luxury tourism industry. Surrounded by coral, the island offers excellent diving and snorkeling experiences, has a vibrant sailing community, and is also home to the only aquarium attraction in the Visayas.

Mactan island is served by Mactan-Cebu International Airport (MCIA), which is currently undergoing a major expansion to have its capacity upgraded to handle 12.5 million passengers annually. This year, it is expected to welcome 10 million arrivals, a 12 per cent increase from 2016. Dusit Thani Mactan Cebu is located approximately 30 minutes by car from the airport.

Dusit Thani Mactan Cebu will be the third property in the Philippines to carry the Dusit Thani brand besides the Dusit Thani Manila and the upcoming Dusit Thani Residence Davao. Next year, the pioneering Dusit Hospitality Management College, a unique fully-integrated hospitality school and hotel, will also open in the capital. Other properties in the pipeline include DusitPrincess Cebu City, dusitD2 Davao and dusitD2 Resort, San Juan.

“Partnering with hotel owners in key markets such as the Philippines is essential to Dusit International’s long term sustainable and profitable growth,” said Dusit International’s Group Chief Executive Officer, Ms Suphajee Suthumpun. “Robinsons Land Corporation’s reputation for quality developments is second to none. We are delighted they have chosen us to manage their property and we look forward to making it a huge success under our esteemed Dusit Thani brand.”

Mr Frederick D. Go, President of RLC, said, “Mactan Island has the potential to become an even greater tourism destination, and there’s no better way to fuel that growth than by partnering with an international five-star hotel operator such as Dusit International to manage our upscale resort development.”

Dusit International currently operates 29 properties in key destinations around the globe with a further 51 projects already confirmed to open within the next three years. Alongside Dusit Thani, other brands in the company’s international portfolio include Dusit Devarana, dusitD2 and DusitPrincess.

About Dusit International
Dusit International was founded in 1948 by Honorary Chairperson Thanpuying Chanut Piyaoui, whose ﬁrst hotel was the Princess on Bangkok’s New Road. Today the company is a leader in hotel management, franchising and education and comprises a unique international portfolio of distinctive hotels and resorts operating under four brands: Dusit Thani, dusitD2, Dusit Princess and Dusit Devarana.

About Robinsons Land Corporation (RLC)
Robinsons Land Corporation (RLC) is one of the Philippines’ leading real estate companies. RLC is involved in the development and operation of shopping malls, offices and hotels and is one of the country’s reputable developers of mixed-use properties, residential condominiums and residential housing developments including socialized housing projects located in key cities and other urban areas nationwide.