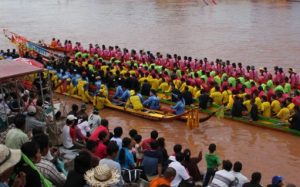 Phitsanulok (Thailand) – August 25, 2017 (travelindex.com) – Tourism Authority of Thailand (TAT) invites tourists to experience the Long Boat Racing Tradition for the first race of the country to win the royal trophy from His Majesty King Maha Vajiralongkorn Bodindradebayavarangkul this September 2017. The event will be held along with the viewing of the beautiful royal ceremony boat parade, with variety of foods from One Tambon One Product, and the light and sound from the concert on 2nd – 3rd September at Nan River, Wat Tha Luang Royal Monastery, Pichit Province.

This event will be followed by the cultural heritage of the river; the event of Long Boat Racing Tradition to win the royal trophy from His Majesty King Bhumibol Adulyadej. There will be a cheering contest for the royal trophy from HRH Princess Maha Chakri Sirindhorn. In second race field, there will be five types of boat races – big boats, medium boats, small boats, tiny boats, and united local people boats, including the ceremony of making merit on boats. The event will be held on 16th – 17th September in Phitsanulok Province.

Moreover, TAT also attracts the tourists who are passionate about Thai tradition to be prepared to travel at the ceremony of Akha Swing Tradition in gratitude for Um Sa Yae Goddess who gives moist and abundance for crops and plants at Akha village, Chiang Rai Province. The tourists are welcomed to see the tradition and observe the simple way of life from early August until the end of September. Or if you are interested in the night view of the Northeast, you would enjoy the event of Marvelous Shrimp Marching (Viewing Nam Yuen shrimps and visiting Phu Jong). In this event, ten thousands of shrimps will appear at night at Kaeng Lamduan, Nam Yuen District, Ubon Ratchathani Province. The event will be held from August to September.

For those who are fond of golf, do not miss the event of Cha-Am / Hua Hin Golf Festival 2017, offering the best promotion of playing 9 fields in one price. Show your swing on the international standard field at an economical price from August to September at the golf course in Cha Am District, Phetchaburi Province and Hua Hin District, Prachuap Khiri Khan Province. In addition, the bikers should be ready to firm your body for attending the 16th International Mountain Bike Competition at Bhumibol Dam to win the trophy of honor with a lot of prizes. This event will be held on 26th – 27th August at Bhumibol Dam, Sam Ngao District, Tak Province.

For those who love shopping, be prepared to grab the bags and not miss the program of the 21st Travel around Thailand and around the World. Meet discounted airfares and quality promotions which are guaranteed cheap prices from around the world. The event will be held on 10th – 13th August at Queen Sirikit National Convention Center. This will be followed by the activity of Mother’s Day to celebrate HM the Queen’s Birthday. We will light the candles for celebration altogether on 12th August in Bangkok and around the country.

Enjoy your shopping trip again before the end of August in the event of the 44th Thailand International TravelFair offering the packages of traveling in Thailand in economic prices. The event will be held from 31st August to 3rd September at Queen Sirikit National Convention Center. Travel to the south of Northeastern region to watch the procession of offerings to the great ancestors in the event of Commemoration to Phraya Krai Phakdi, San Doanta Tradition, venerates the city pillar shrine, and banana show festival. The event will be held on 16th September at Khukhan District, Srisaket Province.

Pay respect to the Lord Buddha at the Um Pra Dam Nam Festival. The event will be held on 19th – 23rd September at Petchabura Buddhist Garden, Wat Bote Chana Mara, Petchabun Province. TAT would like to invite tourists to the south for the Tenth Month Merit Making Ceremony of Nakhon(donation of food or charitable donations). This event will be held on 16th – 25th September at Srinagarindra Gardens, Thung Tha Lat, Nakhon Si Thammarat City Hall. And the end of September, attend the event of Narathiwat Ko Lae Boats, Long Boats, and Yor Kong Boats Race to win the royal trophy in front of the Palace. The event will be held on 21st – 25th September at the Royal 50th Anniversary Celebration Throne at the side of Tha Phraya Sai Dam, Narathiwat City Municipality.

For more information at Call Center 1672