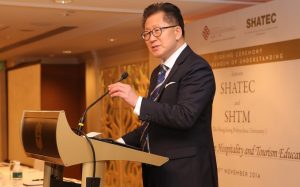 Hong Kong – July 13, 2017 (travelindex.com) – The School of Hotel and Tourism Management (SHTM) of The Hong Kong Polytechnic University (PolyU) is ranked No. 1 in the world, according to ShanghaiRanking’s Global Ranking of Academic Subjects (GRAS) 2017. This is further proof of the SHTM’s commitment to achieving global excellence in hospitality and tourism education and research.

With close to four decades of impressive developments, the School has firmly established itself as a world-class centre of hospitality and tourism education and research. It takes pride in the dedication of its staff members scaling new heights, its research focus and prowess as well as its strong connections with the community, the business and academia over the years. With its international faculty, diverse student body as well as enthusiastic and influential support base, the SHTM is best placed to lead the development of global hospitality and tourism education in the years to come.

With 70 academic staff drawing from 21 countries and regions, the School offers programmes at levels ranging from undergraduate degrees to doctoral degrees. In 2012, the SHTM was bestowed the McCool Breakthrough Award by the International Council on Hotel, Restaurant, and Institutional Education (I-CHRIE) recognizing its breakthrough in the form of its teaching and research hotel – Hotel ICON – the heart of the School’s innovative approach to hospitality and tourism education. A member of the UNWTO Knowledge Network, the SHTM is also the editorial home of Asia Pacific Journal of Tourism Research, Journal of Travel and Tourism Marketing, Journal of Teaching in Travel and Tourism and Journal of China Tourism Research.