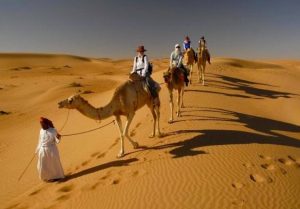 Riyadh (Kingdom of Saudi Arabia) – March 22, 2017 (travelindex.com) – Government led investment is driving a surge in domestic tourism across Saudi Arabia – with experts predicting a 40% rise in the number of internal trips made between 2015 and 2020. The Euromonitor International Tourism Forecast report, prepared exclusively for The Hotel Show Saudi Arabia 2017, has revealed record levels of domestic travel within the Kingdom.

Following the announcement of Saudi Vision 2030 – the country’s attempt to become the world’s leading Arab nation – vast initiatives have been launched aiming at encouraging Saudis to explore all the Kingdom has to offer.

That has led to an almost instant spike in the number of people travelling internally – and one forecasters now predict will see 40% more domestic vacations taken in 2020 than were made just five years earlier.

“Live Saudi Arabia, in collaboration with Saudi Airlines and Aramco, for example, encourages residents to visit historic locations, whilst Leave No Trace aims to raise awareness of the importance of preserving the natural beauty of the country.

Other schemes aimed at boosting domestic tourism include The Colours of Saudi Arabia Forum, which organises various events and competitions related to photography. A Tourism Call Centre is also now in place, providing intensive information about attractions and events across the Kingdom.

“This is not to mention the famous Janadriyaha and Jeddah Ghair festivals, which are held annually and are attracting a growing number of visitors every year,” added Kosutic.

Euromonitor International identifies Makkah as the “main attraction” of the Kingdom due to religious tourism, alongside Madinah, with Al Riyadh Province and the Eastern Province popular with business travellers.

April is set to be a busy month for business travel as the many members of the Kingdom’s growing hospitality industry descend on Jeddah for the fifth edition of The Hotel Show Saudi Arabia.

Organised by MICE Arabia and co-organised by dmg events, the annual exhibition sees thousands of visitors congregate to discuss and do business on the many different hotel and hospitality sectors across its three days, this year 4-6th April.

The event is co-located for the first time this year with Stone & Surface Saudi Arabia. Find out more or register to attend the events for free.