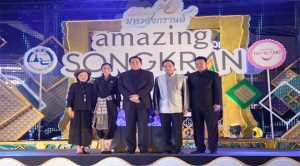 Bangkok (Thailand) – April 10, 2017 (travelindex.com) – The Tourism Authority of Thailand (TAT) kicked off this year’s Songkran celebrations with an Amazing Songkran Joyful Procession on 8 April in central Bangkok. The event, presided over by H.E. General Tanasak Patimapragorn, Deputy Prime Minister of Thailand, marked the opening of the Amazing Songkran Experience Festival 2017, which is taking place in Bangkok’s Benjasiri Park from 8-13 April, and will give everyone a taste of the Thai New Year in the different regions of Thailand.

H.E. General Tanasak Patimapragorn said, “The Amazing Songkran Festival Experience 2017 allows both Thais and international visitors to enjoy a deep appreciation of Songkran in Thailand and understand how it differs from region to region while uniting Thais in a spirit of respect and fun.”

After an opening ceremony which evoked Songkran traditions, the Amazing Songkran Joyful Procession took place on 8 April from 17.30 to 20.30 Hrs. and took a route down Sukhumvit Road, from the Phrom Phong Junction to Pathum Wan Intersection. The colourful procession, which opened the national Songkran celebrations was made up of six parts: 1) Amazing Blossom of Siam; 2) Songkran Goddess, Krini Devi who represented Songkran 2017; 3) Myths and traditions of Songkran told via floats, flowers and dances from the five regions of Thailand; 4) Green Songkran, represented by eco-friendly cars and the Earth of Green Songkran Show; 5) Songkran traditions of Cambodia, Laos and Myanmar; 6) The final parade will showcase classic and distinctive vehicles including rickshaws and tuk-tuks from many parts of Thailand.

Zone 1 is where visitors can pay respect to the Buddha image, experience the ancient traditions of Songkran and learn how to make scented water and flowers displays in fun workshops.

Zone 2 showcases Songkran traditions in five regions, including Pee Mai Muang in the North; Boon Duen Ha in the Northeast, the ethnic Mon-style Songkran in the Central Region, and the Sri Maharaja Songkran from the East, as well as local costumes and the fishing culture from the South.

Zone 3 is where Songkran related snacks and desserts from all regions of Thailand can be sampled, including Khao Chae – a dish of steamed rice in jasmine-scented iced water served with savoury accompaniments.

Zone 4 is the event’s main stage which features shows and entertainment, including Thai Blind Boxing and a Miss Amazing Songkran International Beauty Contest.

Mr. Patimapragorn concluded, “We hope that after having enjoyed a glimpse of how Songkran is celebrated distinctively in different parts of Thailand, Thais and international visitors will be inspired to head upcountry to enjoy Songkran in a traditional setting.”

During the 2017 Songkran Festival, it is estimated that the number of international tourists traveling to Thailand to join the fun will rise 10 per cent to over 470,000. This will generate revenue of 8.05 million Baht, an increase of 17 per cent over the same New Year period last year.