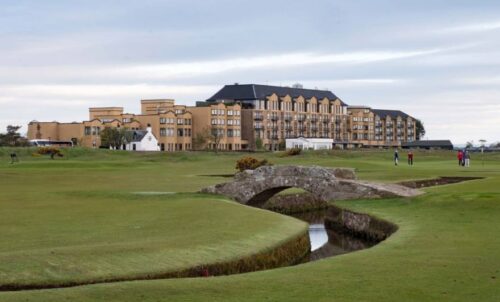 St Andrews, Scotland, United Kingdom, June 6, 2022 / TRAVELINDEX / One of the most prestigious golf courses in St Andrews is preparing to mark a significant milestone. The recognition surrounds a key member of staff at The Duke’s who has spent the last two decades providing a world-class experience at the only heathland course at the Home of Golf. It also accompanies a tranche of investments at the well-regarded venue.

A lot can happen in 20 years, as anyone visiting the five-star Old Course Hotel Golf Resort & Spa will confirm. The Duke’s, for instance, has matured gracefully since opening 26 years ago, undergoing a detailed revamp in 2006 that included upgraded drainage and bunker changes alongside the unveiling of three stunning closing holes.

Overseeing that evolution has been Ayden Roberts-Jones, who started at the resort as senior PGA assistant in 2002. Now manager of The Duke’s, he has been integral to the continued development of the golf operations and more recently supervising the introduction of a new fleet of buggies.

“The Duke’s was my introduction to Scottish heathland golf and I was captivated by it,” he said, recalling his debut at the resort. “We went through a lot of changes during those early days which were dramatic but certainly enhanced the course and its playability. We’ve now engaged in a programme of improvements that will take The Duke’s, once again, to another level in terms of delivering a world-class golfing experience.”

Roberts-Jones confirmed the completion of a detailed winter maintenance schedule by The Duke’s greenkeeping team, whose numbers have increased by 50% in less than a year. The programme of works, he explained, also included changes to the stunning par 4 10th. This, along with a new portfolio of photography, means the carefully maintained course, which is also part of the prestigious collection of Kohler championship courses, is set for a summer to remember.

“As well as completing an extensive winter programme of upgrades, the greenkeeping team has also finished tweaking the right-hand side of the fairway of #10 creating a new landing area which provides different options off the tee. It’s exciting – we’re pushing forward with our service delivery and marketing initiatives which include new imagery of the course. It highlights the ambition of the team at The Duke’s to deliver the most manicured golf experience in St Andrews.”

He continued: “The expansion of the greenkeeping team means the consistency and playability of the course has gone up a notch. It means we can maintain each hole more frequently and provide the attention to detail that our guests expect from a five-star resort.”

In the latest round of golf course ratings, The Duke’s has been ranked #15 in Golf World’s Top 100 Best Golf Resorts in Great Britain and Ireland (May 2021). Also, at the annual Scottish Golf Tourism Awards, the team at the Old Course Hotel were winners of the Best Large Hotel category.

“The changes we’ve brought in recently are part of a much wider plan to deliver continued improvements across all departments at The Duke’s,” said Roberts-Jones. “Being part of a team with such a dedicated approach to securing enhanced service levels year on year makes me extremely proud.”