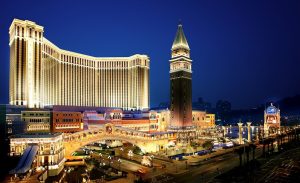 Macao (Macao SAR) – February 20, 2019 – (travelindex.com) – The Venetian Macao has been named ‘Best Hotel in Macau’ at DestinAsian magazine 14th Readers’ Choice Awards which was held in Singapore recently. The prestigious annual awards are based on DestinAsian’s reader nominations across 31 categories including best destinations, airlines, airports and hotels in the Asia-Pacific region.

Book your hotel in Macao, Guang Dong Region and around the world in 55 countries at best rates available. Earn HolidayClick Points and pay at the hotel. Book now at HotelWorlds.com!

The results were generated by a poll conducted by the magazine in late 2018, with readers casting their votes for their favourite tourism and hospitality brands. The Venetian Macao was crowned ‘Best Hotel in Macau’ with Four Seasons Hotel Macao, Sheraton Grand Macao Hotel, Cotai Central, The St. Regis Macao, Cotai Central and Conrad Macao, Cotai Central also receiving top 10 recognition in the same category.

“Achieving five hotels in the top 10 of the ‘Best Hotel in Macau’ category, including the number one spot, is hugely encouraging for Sands Resorts Macao,” said Mark McWhinnie, Senior Vice President of Resort Operations & Development, Sands China Ltd. “Results based on the experiences of members of the public are highly valued by the hospitality industry, so this makes the result even more meaningful. It validates the hard work and commitment of our team members and further drives us to continue exceeding guest expectation at every level.”

The destinations featured in the awards, including Bangkok, Seoul, Singapore and Hong Kong are some of Asia’s most popular tourism hotspots, and Macao’s inclusion alongside such heavyweights is evidence of its growing recognition as a leading regional destination in its own right.

Book your hotel in Macao, Guang Dong Region and around the world in 55 countries at best rates available. Earn HolidayClick Points and pay at the hotel. Book now at HotelWorlds.com!

Established in 2001, DestinAsian is an award-winning travel magazine covering the Asia-Pacific region, distributed in Singapore, Hong Kong, Malaysia, Thailand, the Philippines and the rest of the world.